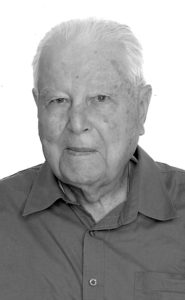 Mr. George Sander, beloved husband of Mrs. Vicky Sander, went peacefully to be with our Saviour on March 22, 2017 at the age of 91 years. A gentle soul, George was born and raised on the family farm. He attended school in Enchant and after serving in the Armed Forces returned to the farm. In 1952 he married Vicky Urban. They farmed until moving to Lethbridge in 2001 but continued to remain actively involved in farming. He was a wonderful father, grandfather and great grandfather. He was a patient teacher and worked in 4-H and with the Green Certificate Training Programs. He could build or fix anything. He was salt of the earth and a father figure to many. Besides his loving wife Vicky, George is survived by his two daughters Karen (Ron) Zielke of Lethbridge, and Brenda Sander (Gerald Fraser – deceased) of Enchant; grandchildren Lindsey Ment (Don Skretting Jr.) of Lethbridge, Kennedy Zielke (Lorin Dodbiba) of Toronto, Gaelyn Zielke (Dallas Widdop) of Lethbridge; great grandchildren Jayce, Kaden and Nash Ment of Lethbridge; brother Frank (Elaine) Sander of Coaldale, as well as numerous nieces, nephews and their families. He was predeceased by his parents Kasimir Jr. and Lucy (Leppert) Sander; brother Sylvester Sander; sister Helena Reimer and brother-in-law Ed Reimer. Vigil Rites (Prayers) will be held at 7:00pm on Sunday, March, 26, 2017 at MARTIN BROTHERS RIVERVIEW CHAPEL, 610- 4 Street South, Lethbridge, Alberta. A Funeral Mass will be held at 1:00pm on Monday, March 27, 2017 at OUR LADY OF THE ASSUMPTION CATHOLIC CHURCH, 2405 12 Ave South, Lethbridge, with Father Kevin Tumback, celebrant. Flowers are gratefully declined. Those who wish memorial donations may be made to Alzheimer’s Society #402, 740 4th Avenue South, Lethbridge, Alberta T1J 0N9 or to The Heart and Stroke Foundation of Alberta, Box 2211, Lethbridge, Alberta T1J 4K7.