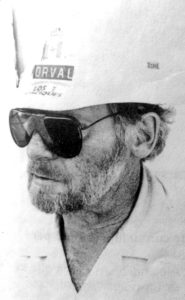 Orval Walmsley passed away after a short but courageous battle with cancer in Lethbridge, Alberta on March 22, 2017 at the age of 83 years with his loving wife and children by his side. Orval was born in Swan River, Manitoba on April 16th, 1934 and was the oldest of 10 children born to Richard and Effie Walmsley (nee Garland). He was predeceased by his mother and father; brother Wayne Walmsley and son, Blair Guzzi. Left to mourn his loss is his wife, Alta (nee MacDonald); children Mavis (Rick O’Donnell), Ardyth (Tim Chambers), Vanessa (Neal Hutchinson), Dana Guzzi, Jim (Wendy) Guzzi, and Jeff (Carol) Guzzi. He also leaves 12 grandchildren and 9 great grandchildren. Orval worked from the age of 15 and over his lifetime traveled the world, working for international mining companies in places as diverse as India and Colombia. He loved working and lived his life to the fullest. He loved his children and grandchildren and spent many hours telling them stories about his adventures, while listening to and celebrating their adventures. He was brutally honest and expected the same in return. He loved watching American Politics and hockey and he loved a good argument. He will be sadly missed. A special thanks to the staff at St Michael’s Palliative Unit for their compassion and care. A private family burial will be held at a later date, as per Orval’s request.