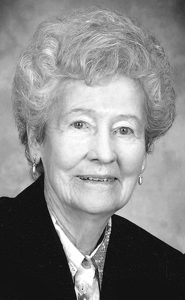 Laverna, beloved wife of the late Edward (Tedd) Jennings, passed away on March 25, 2017 at the age of 93 years. Laverna was born in Milk River, AB and completed her schooling there, graduating with honours in 1941. She attended the U. of Alberta and graduated in 1944 with a B.Sc. in Home Economics. During her final year she was president of the Juanita Society, an academic women’s association which advocated to improve the status and conditions for women on campus. Laverna met her future husband Tedd during her first year of university; they reconnected in Calgary in 1946, after his service with the air force was complete, and were married in Calgary in 1948. They resided in Edmonton briefly while Tedd completed his geology degrees at U of Alberta. They moved to Calgary permanently in 1952. In 1954, she became an active member in many church, charity and volunteer groups in the newly created St. Pius X Parish which continued until her passing. Notably, she became a Meals-on-Wheels volunteer driver (45+ years), which in 2011 earned a nomination for the Volunteer-in-Profile leadership award, sponsored by CTV and the City of Calgary. Laverna lived for, and through, the joys of her sons and their families who will all miss her dearly, as will her many friends. She is survived by sons Barry (Susan) of Calgary and Jim (Nenna) of Anthem, AZ; grandchildren Vincent, Mike (Aiyana), Russ, and Chris (Katie), all of Calgary, Warren (Heather) of Duncan BC, Jeremy (Colleen) and Jennifer (Brian McManus) of Denver, CO, and Ashley (Doug Colbert) of Charlotte, NC; great-grandchildren Ellysia, Fionna, Edison, Tristan, Finley, Jeren, Aiden, Ella, Austyn, Charlie and Carter. She was predeceased by her husband of 68 years, Tedd Jennings in November, 2016.Funeral Mass will be celebrated at St. Pius X Catholic Church (2424 – 24th Avenue N.W.) on Tuesday, April 4, 2017 at 10:00 a.m. Graveside Service to follow at Eden Brook Memorial Gardens. Condolences may be forwarded through www.mcinnisandholloway.com. The family would like to thank the Doctors and nursing staff at the Rockyview Unit 71, Nursing and Support staff at the Bethany Care Centre and the staff at the Staywell Manor Village. In living memory of Laverna Jennings, a tree will be planted at Fish Creek Provincial Park by McINNIS & HOLLOWAY FUNERAL HOMES, Crowfoot, 82 CROWFOOT CIRCLE N.W. Telephone: 1-800-661-1599.