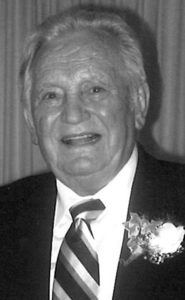 On Saturday, April 29, 2017 at the Chinook Regional Hospital, Bill Sosick passed away surrounded by his loving family at the age of 96 years. Bill was born May 9, 1920 in Yugoslavia to parents Joe and Julia. He had four brothers; Pete, Louie, Morris and John. Bill immigrated to Canada in 1938 and settled in Picture Butte, Alberta. He worked in the sugar beet fields until he joined the Canadian Army in 1942. In 1947, he married the love of his life, Agnes (Wright). They were blessed with 8 children. Bill initially worked construction then began farming in 1952. They continued farming in the Picture Butte area for the next 40 plus years. Bill and Agnes recently celebrated their 70th Wedding Anniversary on January 22, 2017. Besides his loving wife, Dad will be fondly remembered by his children; Sharon (Bruce) McKay, Valerie (Doug) Munton, Gloria (Vinko) Nemecek, Calvin (Penny) Sosick, Colleen (Don) Shimek, Craig Sosick, Leanne Sosick; 15 grandchildren and 18 great grandchildren. Bill leaves to mourn his brothers; Louie (Johanna) Sosick, Morris (Joanne) Sosick; cousin Branko (Anica) Hrstic and families. Bill was predeceased by his parents Joe and Julia; brothers John and Pete; sons Barry and Larry; grandson Bradley and great grandson Karter. Dad’s passion for life, love for family and friends, patience, twinkle in his eye and infectious smile will always be remembered. The family is grateful for the loving care Bill received at the Lodge and Piyami Place in Picture Butte, as well as the Chinook Regional Hospital in Lethbridge. A sincere thank-you to all the staff. A Memorial Service will be held at 4:00 pm on Saturday, May 6, 2017 at the EVANGELICAL FREE CHURCH, 4717 24th Avenue South, Lethbridge, Alberta, Pastor Ian Lawson and Pastor Ron Gartly officiating. In lieu of flowers, the family requests that donations be made in memory of Bill Sosick to Green Acres Foundation, 122 5th Avenue South, Lethbridge, Alberta, T1J 0S9, c/o Piyami Lodge.

One Condolence for “SOSICK, Bill”