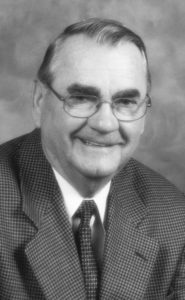 MR. JOHN DAVID ALEXANDER MCLELLAN, beloved husband of 64 years to Mrs. Shirley McLellan, of Lethbridge, passed away at the Chinook Regional Hospital surrounded by his loving family, on Tuesday, May 9, 2017 at the age of 89 years.

John was born on August 25, 1927 in Drumheller, Alberta. He married his life mate, Shirley, on June 20, 1953 and together they raised four children. He spent the majority of his career as a Territory Manager for Ford New Holland Agricultural Equipment, which afforded him and Shirley many trips around the world. John had a lifelong love of sports; coaching and playing into the later years of his life, and yes, playing hockey at the age of 80.

John left Drumheller in his late teens to pursue his dream of playing hockey, starting with a scholarship to St. Michael’s College in Toronto. He went on to play with other teams including the Spokane Spartans, Yellowknife Indians and Red Deer Monarchs (included a tournament in Scotland) and continued on with the Knights of Columbus and the Lethbridge Old-Timers. Besides this, John was very involved in other areas such as coaching and volunteering. He is a lifetime member of the Knights of Columbus. He was inducted into the Lethbridge Sports Hall of Fame as a Builder, member of the Old-Timers Hockey and Baseball associations and loved every minute of it. He was also an avid and loyal fan of the Calgary Flames and Calgary Stampeders.

John was a man of deep faith and passed this on to his family. He led a wonderful life full of sports, work and family, which he managed all three with excellence.

Our family would like to thank the St. Michael’s Bridges Program and the medical staff at the CRH 4th floor for their exceptional care and compassion. To Dr. McIntyre for helping with Dad’s end of life journey and suggesting we celebrate Dad’s 90th birthday in his hospital room before his passing, as this was his ultimate goal to reach 90. He was only three months short. Dad’s words would have been, “That’s life.”

Love you, rest in peace.

A Prayer Service will be held at ST. MARTHA’S CATHOLIC CHURCH, 355 Columbia Blvd. West, Lethbridge, AB, on Thursday, May 11, 2017 at 7:00 P.M. with Deacon Michael Pollard officiating.

The Funeral Mass will be celebrated at ST. MARTHA’S CATHOLIC CHURCH, on Friday, May 12, 2017 at 11:00 A.M. with Father Salvador Ahumada celebrating.

Following the Funeral Mass, John will be laid to rest in Mountain View Cemetery.

In memory of John, donations may be made to a charity of your choice.

One Condolence for “MCLELLAN, John”