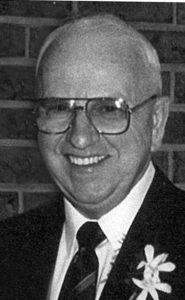 James Roscoe “Jim” Dunstan passed away at the age of 89 in the Fairmont Extended Care Facility, in Lethbridge Alberta, on May 24, 2017. Born on August 5, 1927 in Gilbert Plains Manitoba, Jim married Katherine (née Reinheimer) on May 25, 1949 in Melville Saskatchewan. Over the years they also resided in Ponoka, Alberta, Prince Albert, Saskatchewan, and Calgary, Alberta, prior to becoming longtime residents of Lethbridge for the second time, buying the house next door to the home they had built more than a decade earlier. Jim had a number of diverse occupations over his career, including management in the hardware business with Macleods Ltd., and in the investment business with Richardson Securities of Canada. He served as Development Officer and Executive Officer to the Senate at the University of Lethbridge, prior to taking the position of Chairman of the Alberta Electrical Marketing Agency. He retired from working life as a member of the Alberta Public Utilities Board. He was very civic minded, serving on numerous committees and was involved in several community service organizations over the years. These included the Gideons and the Kiwanis Club in both Calgary and Lethbridge, and he was a Past President of the Lethbridge Chamber of Commerce. Jim was elected to two consecutive terms on Lethbridge City Council, which included serving on the Police Commission, the Air Transport Committee, and the Lethbridge & District Exhibition Board. He is survived by his wife Katherine, sons Jim (Joanne) and Brent (Francis), grandchildren Mark (Alison), Andrea (Blaine) Bohun, and Ashley, great-grandchildren Nolan and Rylie, sisters Katherine Bassett and Donalda (Bob) Messer, sisters-in-law Shirley Phillips and Violet Reinheimer, as well as numerous nephews and nieces. He was pre-deceased by his grandparents Simon and Emily Presley, parents Edward and Maglan, and his brother Blake. A private graveside service and interment will be held in accordance to his wishes. In lieu of flowers, please consider making a contribution to the Gideons International, PO Box 3619, Guelph, ON N1H 7A2 or the Canadian Cancer Society, 200, 2424 – 4th St. SW, Calgary, AB.