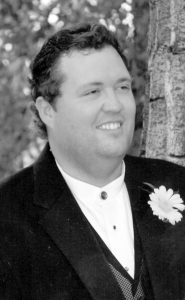 Mr. Lawrence “Lee” DeBoer of Coaldale, beloved husband of Mrs. Julie Landry-DeBoer, passed away suddenly at the Chinook Regional Hospital on Friday, June 9, 2017 at the age of 48 years. Lee was born in Lethbridge, AB and attended school at Nobleford and Drumheller. After attending University, he went to Lethbridge College. He was currently working at MPE Engineering. He was actively involved in political organizations starting with the Reform Party. He was an avid collector of comics, role playing games, and books. His greatest love was his family. Besides his loving wife Julie Landry-DeBoer, Lee is survived by his daughter Jasmine and son Quinn; his parents Marvin and Vivian DeBoer; brother Ken DeBoer (Naomi); sister Kim DeBoer (Daniel); aunts, uncles, nieces and nephews, cousins and their families. Lee was predeceased by his grandparents Clarence and Mary DeBoer; Ted and Gladys Ronney and Isabel Ronney. A Memorial Service will be held at 2:00pm on Friday, June 16, 2017 at MARTIN BROTHERS RIVERVIEW CHAPEL, 610-4th Street, South, Lethbridge, AB. Flowers are gratefully declined. Those who wish, memorial donations may be made to the Heart & Stroke Foundation of Alberta, Box 2211, Lethbridge, AB T1J 4K7www.heartandstroke.ab.ca; the Canadian Diabetes Association, 204, 2323-32nd Avenue NE, Calgary, AB T2E 6Z3, www.diabetes.ca; or to the charity of your choice.