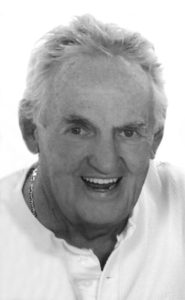 It is with great sadness we announce the passing of PATRICK “SULLY” SULLIVAN, who passed away peacefully on Monday June 19, 2017 in Lethbridge at the age of 74 after a long battle with Lymphoma. He is survived by his loving wife of 48 years, Betty Jean Sullivan; daughter Megan (Scott) Routly of Calgary; two granddaughters Taylor Routly and Shay Routly of Calgary; brother Tim Sullivan of Lethbridge and sister Shannon (Jim) Dunlop of Olds as well as numerous nieces and nephews. He was predeceased by his parents, Len and Helen Sullivan of Lethbridge and his sister Judy (Bill) Brown of Dundas.

Sully had worked at the Lethbridge Herald for 38 years, both as a sports and entertainment editor before retiring in 1999. He spent his retirement time golfing and with family and friends. Sully was known for his laughter, love of life, telling jokes and stories, loving sports and for his immense love of his four girls.

Sully did not want a funeral (he had “attended too many of those in the past few years”). An open house will be held at the ITALIAN CANADIAN CULTURAL CENTRE, 1511 – St. Edward Blvd. N, Lethbridge, AB, on Friday, June 23, 2017 from 2:00 to 4:00 P.M. to celebrate his life. Sully’s request is for everyone to tell a joke or funny story in his honour.