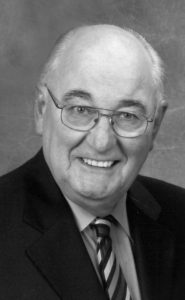 Hank Harbers, beloved husband, father, grandfather, great grandfather and friend, was suddenly called home to his Lord and Saviour on Tuesday, July 25, 2017, at the age of 80 years. He passed away at the Chinook Regional Hospital in Lethbridge just seven days short of his 81st birthday. Hank was a loving husband to Tina for 56 years and a kind and generous father / father-in-law to Peter and his wife Lora and to Stan and his wife Grace. He was a caring grandfather to Melissa (Shane), Bryce, Janelle (Darcy), Alex, Trevor (Julie) and Danielle (David) and a proud great grandfather to Hudson, Sophia, Ava-Lynn, Levi and Lily. He is also survived by his sister Bernice (Allen) Huxley of Three Hills, sister-in-law Hilgonda Harbers of Monarch, brother-in-law Jake (Pauline) Applehof of Lethbridge, sister-in-law Grace (Marvin) Tolley of Lethbridge, numerous nephews and nieces and many dear friends. Hank was preceded in death by his daughters Patricia in 1963 and Denise in 1989, his parents Gerrit and Dora, his brothers Peter and John, his sister Gertie, his brother-in-law John Hofman, and his brother-in-law and sister-in-law Harry and Anola Appelhof. Hank was born in 1936 and was raised in the Monarch / Nobleford area. He was a hard-working farm boy who spent the first 74 years of his life on the farm. Hank loved the farm with all of its challenges and rewards, from raising a family to raising grain, hay, sugar beets, cows, horses, chickens, pigs and even buffalo. He loved to play fastpitch softball where he was known for his legendary windmill pitch. Hank was often a surrogate father to some “young-us” who had gone astray, parenting them back into the graces of society. He was happiest when he was helping others. He and Tina eventually moved to Lethbridge in 2010, where they enjoyed semi-retirement with family, friends and travel. Hank was not only a big man in stature, but he also had a big heart and even bigger hugs to give. His size was only overshadowed by his love for his Lord and Savior, his love for his family, and the joy and fellowship he received from his church family. Hank will be missed by all who knew and loved him. Family and friends are invited to pay their respects between 7:00pm-8:00pm on Sunday, July 30, 2017 at MARTIN BROTHERS RIVERVIEW CHAPEL. A Graveside Service will be held at 12:00pm on Monday, July 31, 2017 at MOUNTAIN VIEW CEMETERY, 1210 Scenic Drive South, Lethbridge, AB with Pastor Cameron Fraser officiating. A Memorial Service will be held at 1:00pm on Monday, July 31, 2017 at MARANATHA REFORMED CHURCH, 260 McGill Blvd. West, Lethbridge, AB with Pastor Jim Zondervan officiating.