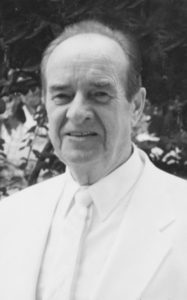 JOHN HENRY “JACK” BRIDGE, 93, of Raymond Alberta passed away on the morning of August 6th, 2017 surrounded by his loved ones. Jack was preceded in death by his loving wife of 65 years, Maxine Dudley Bridge, his grandsons Paul Bridge and Locke Arrington, his granddaughter Kaitlin Bridge and his siblings Avilda, Geraldine, Betty and Jim. He is survived by his eight children: Grayden (Claudia), John (Bonnie), Kaye (Phil) Merrill, Alan (Colleen), Dianne (Dave) Jardine, Barbara (Ron) Fromm, Robert (Julie), Rebecca (Marc) Rompain, his 39 grandchildren and his 87 great-grandchildren.

Jack was born June 5, 1924 in Magrath, Alberta where he spent his formative years working on the farm, riding horses, and going to school. On December 16, 1949 Jack and Maxine Dudley, his childhood sweetheart, were married. As a young married couple Jack and Maxine moved first to Lethbridge and then Calgary before moving their young family to Raymond where they settled for the rest of their lives, leaving only to serve a mission in the Seoul South Korea LDS Temple. Jack always kept an impressive and bountiful garden, and you could always count on a roaring fire in the fireplace which warmed the souls of countless people as visitors enjoyed the hospitality of the Bridge home. Blessed with a beautiful baritone singing voice, Jack shared his talents over the years by singing at numerous events. He had a very quick wit and a keen mind right up to the end. Jack was kind and generous and easily made friendships that lasted a lifetime. He loved Waterton and going for drives in the country and always enjoyed a well done steak. He was an excellent cook and played a mean game of cribbage or Rook. He was stalwart and faithful in his testimony of the restored gospel of Jesus Christ. His greatest pleasure was being around his family who adored him and who now look forward to seeing him again.

Jack loved those who gave him exceptional care at Good Sams and at the Raymond Hospital and as a family we are so very grateful for this service to our Dad.

The Funeral Service will be held on Friday, August 11, 2017 at 11:00 a.m. at the Church of Jesus Christ of Latter-day Saints, Raymond Stake Centre with President Lanny Howard officiating. Friends may meet the family prior to the service at the church from 10 a.m. to 10:45 a.m. Interment to follow in the Temple Hill Cemetery, Raymond.