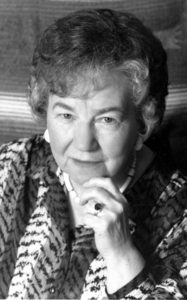 It is with great memories, much love, and heavy hearts that we announce the passing of Dorothy Elaine Smith at the age of 92 on August 3, 2017 at the Willow Creek Continuing Care Centre in Claresholm, Alberta. Dorothy was born in Glendale, California to Roy and Margaret Soby. She moved back to Claresholm with her parents at the age of 2. Dorothy attended school and helped with the family store, Soby & Smith. In 1942, she enrolled in Education at the University of Alberta, Edmonton. Upon graduation she returned to Claresholm and began teaching school in Stavely. In July, 1949, she married Henry (Hank) Smith and they raised 2 children, Kirby and Debbie. Dorothy lived the remainder of her life in Claresholm.

Dorothy, or Dot as she was known to her friends, was fond of music, tennis, figure skating, curling, golfing and dancing. She was a faithful member of the Claresholm United Church. She had many close and enduring friendships, nurtured with regular coffee meetings. In early retirement she enjoyed travelling. This included trips to Europe and Asia. Dorothy was always very positive no matter what the circumstances and in line with her Norwegian heritage, very fond of desserts.

Dorothy was predeceased by her parents, Roy and Margaret Soby, her only brother, Gordon Soby and her husband, Hank Smith. She is survived and will be greatly missed by her son, Kirby Smith, daughter-in-law, Katherine Storey Smith, her daughter, Debbie Lozeman, son-in-law Fred Lozeman, and only grandson, Jeremy Lozeman.

A Graveside Service was held Thursday, August 10, 2017, at the Claresholm Cemetery (3800-8 Street West) followed by a Celebration of Dorothy’s Life at the Claresholm United Church (4803-2 Street West, Claresholm). In lieu of flowers, the family has requested that donations be made to the Willow Creek Continuing Care Centre (Box 700, Claresholm, Alberta T0L 0T0).

Condolences may be forwarded to the family at