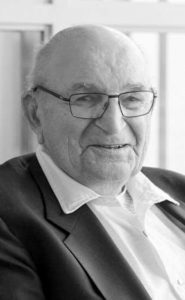 It is with great sadness that we announce the passing of our Father, Grandfather and Great-grandfather, Alex Koskewich on Monday, August 14, 2017 at the age of 91 years.

Alex married his beloved wife Florence on January 7, 1950. Together they raised their two sons, John and Darrel, on the family farm in Del Bonita. Alex continued to farm and was very active in the community. He was on the local school board for 25 years, president of the local Unifarm, and was very active with the local 4H Club. Everyone in Del Bonita knew Alex as a kind man and a friend, always willing to help.

Alex retired from farming and moved into Lethbridge in March of 2004. He resided at the Pemmican Lodge where he met many people who became his friends. You would see him attending all of the entertainment and activities at the Lodge, with camera in hand, taking pictures to share with everyone who lived there, whether they wanted to see them or not. He moved to Edith Cavell on March 1, 2017 after suffering a massive stroke and remained there until his passing.

Alex is survived by his son Darrel (Cindy), his grandson, Jeremy, his granddaughters, Tiffany (Lance), Jennifer (Matthew), Alexa and Katie. He is also survived by his sister, Vickie and sister-in-law, Verna. Alex had 11 great grandchildren and many nieces and nephews that he loved dearly and who will hopefully follow his example of kindness.

In lieu of flowers, donations may be made to the Pemmican Lodge, in care of Green Acres Foundation, 105 – 5 Avenue South, Lethbridge AB T1J 0Z7 where he spent 13 very happy years with his many friends.