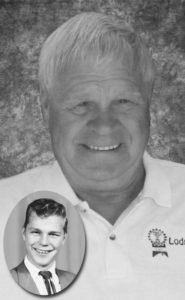 ERIC WILLIAM “BILL” KRONLUND, beloved wife of the late Inga-Lil Kronlund, of Lethbridge, passed away at the Legacy Lodge on Tuesday, August 15th, 2017 at the age of 81 years.

He is the loving father of Laurel Lind Grbac of Langdon, AB., William Dean Kronlund of Kelowna, B.C., Robert Darren Kronlund of Monarch, AB., and James Anders Kronlund of Hamilton, ON. Bill’s memory will also be cherished by his seven grandchildren and one great-grandchild.

He is also survived by his sisters Ester Knight, Lil Miltimore and longtime companion Jacqueline Hehr.

One Condolence for “KRONLUND, Eric”