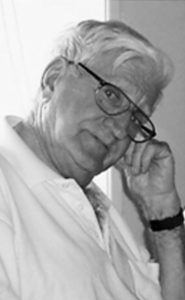 PHIL BOON was born July 16, 1920 in Liverpool, England: the youngest child and the only son of his parents Henry and Caroline Boon. He left school at the age of 14 years (as was common in those days) and was apprenticed as a Printer. Phil went on to serve in the British Army Engineer Corps during World War II where he spent 6 years in Egypt excelling at many engineering projects. At the end of the war he married his first wife, Joyce, on December 25th, 1945.

In March of 1957, our Dad packed up his young family and immigrated to Canada arriving in Lethbridge, on his way to Vancouver. But he never left – he loved Lethbridge. Dad was initially employed as foreman of Robin’s Printing but went on to propose, create and manage the University of Lethbridge Printing Department. He became a valued and respected member of the Lethbridge community: participating in many productions with Lethbridge Musical Theatre (his favourite being Fiddler on the Roof), singing with the University Singers, Vox Musica and the Lethbridge Barber Shop Singers. He was a volunteer with Big Brothers, Meals on Wheels and a member of the Lethbridge Senior Centre.

Dad’s passions were music and wood/ metal work. His workshop was his pride and joy. In that workshop he created many, many beautiful projects from hobby horses to doll houses, go carts to lazy susans, cedar chests to glider rockers, kayaks, and his famous pendulum clocks. His credo was “I too did something make and rejoiced in the making”. And he did!

Dad loved the outdoors – fly fishing, hiking, boating, kayaking and camping. He came to really enjoy travelling and he was fortune enough to travel to many places throughout the world with his second wife, Mary.

Our Dad will be missed by many who have come to appreciate his friendship, his talents and his love. A special thank you is sent to the wonderfully caring staff at Columbia Assisted Living, Jacquie Whiffen of HomeCare and the nurses and doctors at Chinook Regional Hospital.

It is with heavy hearts that we say good-bye to Dad but it is comforting to know that he is at peace ….. following his life well lived.

A Graveside Service will be held at MOUNTAIN VIEW CEMETERY, Scenic Drive South, Lethbridge, on Wednesday, September 6th at 1:00 P.M. Please meet at main gate by 12:50. Following the graveside service, a time of fellowship & refreshments will be held at CORNERSTONE FUNERAL HOME, 2800 – Mayor Magrath Drive South, Lethbridge, from 2:00 P.M. until 4:00 P.M.

One Condolence for “BOON, Philip”