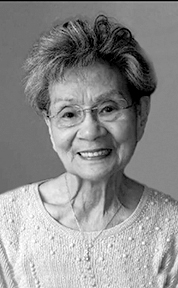 Our beloved Mother passed away on August 31, 2017, at the Chinook Regional Hospital. Her long journey with Alzheimer’s ended as she had wished, peacefully in her sleep.

Mom was a woman ahead of her time. She loved to work and though small in stature she could out work most everyone. As her Alzheimer’s progressed and her memories became dim, she would still recall with pride her working days in the strawberry, potato and sugar beet fields. In 1970, with the support of her brothers, she purchased Wendy’s Dairy Bar in Vauxhall. With a crew of six children still at home, she became a successful entrepreneur. She was born to be in the fast food business.

Her grace and courage in life came from the unconditional love she felt from her parents. Her happiness came from her children and grandchildren.

Mom was predeceased by Dad in 1991, her parents and her brothers Kaz(Helen), Horsey and Nobby.

We would like to take this opportunity to thank the staff at St. Michael’s Health Centre, where she resided for the past three years.

One Condolence for “MARUNO, Katoye”