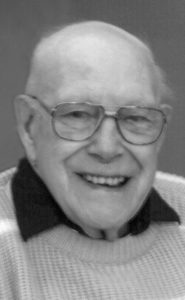 Mr. Albert “Al” Denton Smith of Lethbridge, beloved husband of the late Mrs. Violet “Vi” Smith, passed away peacefully at St. Therese Villa on Tuesday, September 5, 2017 at the age of 93 years. Al was born in Lethbridge to Richard and Rose Smith on October 23, 1923. Al and Vi were married on January 21, 1950. He began working at the Lethbridge Research Station, then left to serve in the Army during WWII. He returned to the Research Station and retired from there at the age of 56. Al continued his passion for the game of golf well into retirement. Al was a gentle spirit who loved his family and friends. He is survived by his son Dennis (Heidi) Smith of Mesquite, Nevada. Close to Al was his special niece, Darlene Smith who was like a daughter to both Al and Vi; special niece Joan Schaufele, and good friends Rae and Norm Haugen. He is also survived by his grandchildren Kathryn (Paul) Serpe, Carolyn (Ian) Simmons, Jennifer (Ryan) Miller, Garrett (Chantele) Danker, and Trevor (Paula) Haugen. Also left to mourn are his sisters in law Lydia Herrmann and Doris Smith; brother in law Hilbert (Wynn) Schaufele; as well as several great grandchildren, numerous nieces and nephews, and their families. Al was predeceased by his parents, as well as six brothers: Art, Bill, Tom, Dick, Percy, and Doug, and his two sisters, Dorothy (Harry) Bulpitt and Mona (George) Fraser. Family and friends are invited to pay their respects between 7:00pm and 8:00pm on Friday, September 8, 2017 at MARTIN BROTHERS RIVERVIEW CHAPEL, 610 – 4TH Street South, Lethbridge, Alberta. Those who wish, memorial donations may be made to a charity of their choice.