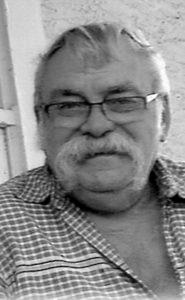 GARRY MELVIN THOMPSON, 77, passed away in Lethbridge on Monday, September 11, 2017. He was born on July 18, 1940 in Hay Lakes, Alberta. Garry grew up on a dairy farm but became a Journeyman Carpenter by trade. Later in life his passion became collecting old pieces of furniture and fixing them up to give them a new purpose. Survivors include his two sons Troy (Tracey) and Shane Thompson, two grandchildren Taylor and Tanner Thompson, all from Lethbridge, and one brother Bob Thompson of Camrose. Garry was predeceased by his parents Melvin and JoAnna, two brothers Wayne and Ricky Thompson and one sister Wendy Brett. At Garry’s request there will be no formal service. A Celebration of Garry’s life will be held on Saturday, September 23, at 2:00 PM at LA Lounge, 542 13 St N, Lethbridge.

“ Please remember him by filling your glass, raising it high and having a toast in his name.”