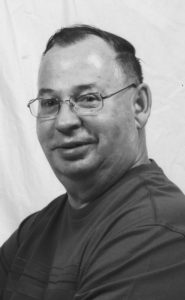 It is with great sadness that the family of DOUG LEWICKI announces the passing of their beloved husband, father and grandfather.

Doug was born in Edmonton, AB on May 9, 1942 and two days later moved to Tako, SK with his family, followed by Unity, SK. He began the chartered accountant class while in Kindersley, SK later switching to the hospital field. He was married to his wife, Gail, just shy of 52 years. They first settled in Kindersley, SK and moved to Lethbridge in 1967. Doug was an avid hockey enthusiast; he played as a child and later on in life played with the Lethbridge Bone Crushers. He also had a tremendous amount of love and loyalty toward the Saskatchewan Roughriders. His career in the hospital field took him from Kindersley, to Lethbridge, to Calgary, to Brooks and then finally to Coaldale. In 1996, Doug started working in the business office of the Green Haven Garden Centre until his retirement on January 22, 2010.

He was predeceased by his parents, two brothers and his daughter.

Doug will be deeply missed by his family ad those whose lives were touched by him.

Due to fragrance allergies and intolerance, flowers are gratefully declined and perfumes discouraged.