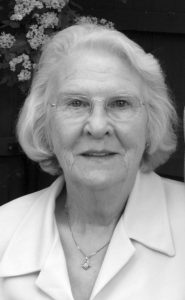 Ruth passed away peacefully at the age of 91 on Monday September 25, 2017 at the Chinook Regional Hospital. She received excellent care and attention from the doctor and nurses on 4C during her brief stay in the hospital. Ruth was born in Calgary and was of Swedish descent. She and her parents lived in different parts of Alberta with significant time spent homesteading in the Barrhead region when Ruth was a child. Ruth graduated from the Calgary General Hospital nursing program in 1947; being a nurse was something that made her very proud. After some hospital-based nursing, she became a District Nurse in the Foremost area. It was there Ruth met medical student John (Jack) Reynar home for the summer vacation. They married in 1951 and had two children, Karin Lee and Marlys Joan. They lived on a small farm in Brooks for many years with Ruth taking care of much of the yard work and growing beautiful flower and vegetable gardens every year. In 1974, Ruth and Jack moved to Lethbridge. Ruth worked as an occupational nurse for Woodward’s for a number of years as well as volunteering for the Helen Schuler Nature Centre, the Galt Museum and the Revelers. She loved sewing and was part of the Sewing Guild of Lethbridge for many years. Ruth was an excellent cook and loved entertaining; she put on an annual Lucia Day brunch with lots of great food and glogg. She loved flowers of all kinds and always had a flower garden as well as flowers in the house whenever possible. Ruth and her husband did extensive traveling over the years and she enjoyed recounting the many interesting and exotic places they visited; the last big trip being a month-long ‘around the world’ trip in 2004. Ruth was predeceased by her daughter Karin Lee, her parents and her husband, Jack, as well as many other family members and friends. Her little dog Sasha, whom she loved deeply, also passed away recently. Ruth is survived by her daughter Marlys and many friends who loved and appreciated her very much. Ruth was very thankful for her long and fulfilling life and did not want a memorial service. Those who wish to honor Ruth can do so by donating to the Lethbridge and District Humane Society (2920 16 Ave N, Lethbridge, AB T1H 5E9), a charity close to her heart.

One Condolence for “REYNAR, Ruth”