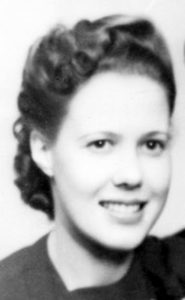 Erma (Rasmussen) Bikman died peacefully in her sleep, September 29, 2017. She had dementia for the past few years, but never lost her cheerful spirit and grateful nature. She was born on the family farm southwest of Raymond, on May 28, 1920, the 3rd of 5 daughters and 5th child of George Rasmussen and Edna McBride Rasmussen. She had two older brothers. She was predeceased by all of them, as well as her beloved husband of nearly 75 years, Bill Bikman, and their precious daughter, Debra Edna Bikman Bird and daughter-in-law, Suzy. Left to mourn her passing and celebrate a life well lived, are her sons, Gary and Shane; Gary’s wife, Sheila; son-in-law, Craig Bird; 31 grandchildren and 71 great grandchildren, as well as numerous nieces and nephews. Erma was a hard worker and while growing up, did her share on the family farm, including milking cows, herding them on horseback, tending the large garden and helping to clean and care for their home. She was a good student and excelled at math. Her love of numbers led her to study accounting at the LDS Business College in Salt Lake City. Upon returning to southern Alberta, Erma worked as a bookkeeper at a local service station and later for Claude Bolton’s accounting firm. It was while working at the service station that she met the man who’d become her husband and eternal companion. They married for time, in Medicine Hat on November 7th, 1942, while Bill was serving in the Canadian Air Force stationed there. (In October 1980, they were sealed for all eternity in the Cardston Temple) Erma was a faithful member of the Church of Jesus Christ of Latter-day Saints. She served in many leadership and teaching positions. Her example and encouragement helped her children follow in her footsteps. “She taught us how to pray and develop a personal relationship with God” was the praise and credit her children, Gary, Debra & Shane often gave. Erma was very social and enjoyed the company of others. She also liked bowling and golf. The latter became a lifelong passion. It was part of the motivation for her to convince Bill to buy a winter home in Palm Springs where she could golf 4 or 5 times a week. And she was good. She didn’t hit a long ball but it was always straight down the middle. One of her sayings was, “Drive for show, putt for dough.” She usually made a few bucks from the “girls” she golfed with. Erma was a meticulous housekeeper and terrific cook, as anyone who’s eaten her butter tarts or boiled raisin cookies can attest. She even learned to make one of her husband’s favorite Jewish dishes, Kasha. It became a regular part of their delicious roast beef dinners. Erma was very entrepreneurial. She opened what may well have been the first women’s fitness center in Lethbridge. She went on to help several friends in other cities do the same. She also started and owned Carousel Knitting. It was here that she became very well known for her knitting classes and the fashion shows she staged at the Yates Center. Erma’s models were her lovely customers wearing the attractive dresses and outfits she’d helped them create. Her beautiful teenage daughter, Debra, also an accomplished knitter, was her favorite model. Erma’s proudest accomplishment and title was as a beloved “Babba.” She showered her grandchildren and great grandchildren with love, affection, encouragement…and lots of hand knit sweaters and outfits. They cherished her attention and appreciated all the life lessons she shared. She missed Bill. The 22 days since his passing is the longest they were ever apart during nearly 75 years of marriage. It’s a testament to the strength of their love that she has now gone to be with him. We suspect Bill may have appeared to her in a dream and promised he’d booked a tee time on a heavenly course for September 30th. Once again, we express deep appreciation for the kind care and loving service provided Erma by the staff at St. Therese Villa. They went above and beyond for her, especially since the death of her husband 3 weeks ago. A Funeral Service will be held on Saturday, October 7th, 2017 at 10:00 AM at the CHURCH OF JESUS CHRIST OF LATTER-DAY SAINTS – STIRLING CHAPEL, 413 3 St, Stirling, AB, Bishop Jim Seely will preside. Friends may meet the family prior to the service at 9:00 AM until 9:45 AM. Interment will follow the service in the Bikman section of the Stirling Cemetery.