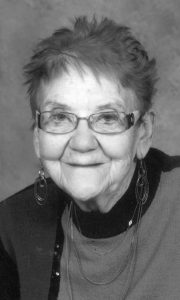 Doris Adaline Boehr of Lethbridge, beloved wife of the late Ben Boehr, passed away at the Chinook Regional Hospital on Wednesday, October 11, 2017 at the age of 90 years. Doris was born, raised and married in Langham, SK. She moved to Abbotsford for a brief period of time before moving to Southern Alberta and settling on an acreage just outside of Lethbridge by Coalhurst. She managed the kitchen at Phil’s Restaurant, was a manager at Sears in the cafeteria and later switched roles and moved into the office. She also spent time working at MCC Self Help, later known as 10 Thousand Villages, as well as the MCC Thrift Store. Through the years, mom enjoyed baking & cooking for her family. Family dinners and baking on Saturday’s are fondly remember by her family. She loved sewing, and made quilts for every grandchild, and oodles of Barbie doll clothes. She enjoyed hosting and entertaining friends while playing games. Her travels took her to many parts of the world, from Greece to India, to Bangladesh, to South Korea, to Thailand, to Alaska to Hawaii. She is the loving mother of Doug (deceased) & Margaret (deceased) Boehr, Carol (deceased) & Frank Doerksen, Eugene & Cheryl Boehr, Lloyd & Debbie Boehr, Lindsay (deceased) & Carol Boehr. She had twelve Grandchildren, eighteen Great-Grandchildren, and three Great-Great Grandchildren. She is also survived by her brothers Ken, Dennis and Bruce, and sisters Mabel, Shirley, Kathy. Besides her loving husband Ben Boehr, she was predeceased by her brothers Gilbert, Norman and David; sister Lucille; granddaughter Breanne. A Visitation will be held from 12:00 – 12:45pm, prior to the service. The Funeral Service will be held at 1:00pm on Monday, October 16, 2017 at the LETHBRIDGE MENNONITE CHURCH, 4303 3 Ave S, Lethbridge, AB In lieu of flowers, those who wish may make memorial donations to the Salvation Army (PO Box 8200, Winnipeg, MB R3C 4W5) or MCC – Calgary (210, 2946 – 32 St NE Calgary, AB T1Y 6J7) A special thanks to the staff of Good Samaritans West Highlands and to the palliative care at the Chinook Regional Hospital.

One Condolence for “BOEHR, Doris”