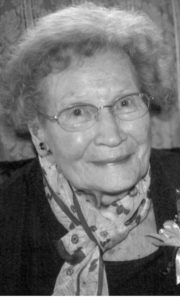 Norah Gweneth Hutton, beloved wife of the late Francis (Frank) Hutton, passed away peacefully in Calgary on Tuesday, October 10, 2017. Norah was born in Cheslyn Hay, Staffordshire, England on October 25, 1916. She came to Canada with her parents John and Alice Brindley and younger brother Keith in 1922. The family settled in Lethbridge and later purchased a farm east of the city. Norah attended White School and later worked on the family farm, contributing to its operation. She married Frank Hutton on June 28, 1944 and together they raised two daughters, Joan and Margaret. Norah was a devoted mother, always supporting her daughters in all of their endeavors. She was a welcoming hostess who loved to cook and bake and she especially enjoyed arranging and displaying the wide array of flowers that Frank grew in their garden. In retirement Norah and Frank were fortunate to be able to travel, their favorite destination being Australia. In 1997 Norah and Frank moved from Lethbridge to Dreamview Village, Hawkwood in Calgary to be close to family. They treasured the friendships they made there and Norah referred to those special ladies as the best friends she’d had in her life. In later years, as Norah’s mobility declined, she lived in several care facilities, most recently Carewest Royal Park. Norah was a person of great honesty and integrity who had a very strong work ethic and a determined attitude. Her ability to persevere through difficult health challenges has made her an inspiration to all who knew her. The focus of her life was her family, and in later years she has taken great delight in her great-grandchildren. A special highlight for Norah was her 100th Birthday celebrations in 2016, which included a party attended by family and friends from near and far. Norah was pre-deceased by her husband Frank in 1999, as well as her parents and brothers Keith and Dennis. She is survived and fondly remembered by her daughters Joan and her husband Wayne Nyhof of Calgary and Margaret and her husband Stewart Homer of Melbourne, Australia; two granddaughters Janette and her husband James Vickers of Revelstoke (Hannah and Lillian) and Carolyn and her husband David Holbrow of Calgary (Owen and Margot); two grandsons Geoffrey Homer and his wife Carly (Lexi and Emme) of Melbourne and Andrew Homer, also of Melbourne. She is also survived by extended family in both Canada and England. Special thanks go to Dr. Patrick Quail and Dr. Paul Gladman for their professional care and kindness, and to the staff and residents of Carewest Royal Park. Thanks also to the staff at Rockyview Hospital for their compassionate care and support. If friends so desire, memorial tributes may be made to the Heart and Stroke Foundation of Alberta, 200-119-14 Street N.W. Calgary, Alberta T2N 1Z6. A private family service will be held in Lethbridge.

One Condolence for “HUTTON, Norah”