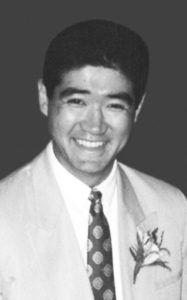 It is with heavy hearts that we grieve the loss of George Masanari Urasaki who passed away on October 10th, 2017 at the age of 47 years. He was a son, brother, uncle, cousin and friend.

George was born in Okinawa, Japan and emigrated to Lethbridge with his family, as a toddler.

George received his public schooling in Lethbridge, graduating from Winston Churchill before attending University in Calgary and Lethbridge. He was employed in a variety of jobs over his lifetime. He worked in an iron foundry, managed the family Edo franchise and installed office furnishings. He was also a safety consultant, an office administrator, bartender and cook.

He had the opportunity to travel and visited places such as Japan, China, England, the Dominican Republic, the Middle East and various places in Canada and the US.

George did very well in school and received several scholarships before attending University. He played a variety of school sports and continued to play Rugby for many years after graduation. George loved fly fishing and spent many days on the water. He obtained a black belt in karate and played both the guitar and the violin in his younger years.

He loved his friends and family and his happiest times were with others. George had a large circle of friends. His sense of humour and easy-going manner will be missed greatly.

George was predeceased by his mother, Shizuko. He is survived by his father, Roy; brother, Jim; sister-in-law, Cindy and their children Jenna and Kobe; his sister, Rumi and her children Evian, Ocean and Skyy, as well as their father, Miro Kyjac.

A Private Family Service will be held at 11:00am on Wednesday, October 18, 2017 at the SOUTHERN ALBERTA JAPANESE UNITED CHURCH, 821 – 9th Avenue North, Lethbridge, Alberta, with Reverend Aldeen McKay officiating.

Friends are invited to a Celebration of George’s Life from 1:00pm-3:00pm at the COAST LETHBRIDGE HOTEL & CONFERENCE CENTRE, 526 Mayor Magrath Drive South, Lethbridge, Alberta, on the same day.