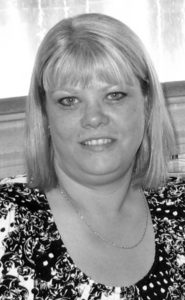 It is with heavy hearts and profound sadness that we are announcing the loss of Sheila Faye Going on October 12, 2017 at the young age of 46. She will be forever missed by her husband, Dwight Gray; parents, Don and Linda Going; sister, Dawna Lynn Ferguson (John) and their son Jesse, as well as numerous uncles, aunts, cousins and their families. Sheila had many cherished friends that share our sorrow. She was predeceased by her grandparents Gladys and Glenn Going and Dick and Pearl McIntosh. Sheila and her Grandma Pearl were extremely close, for which she was always grateful to have had that opportunity in her life. Sheila was born and grew up in Lethbridge, graduating from Winston Churchill before attending LCC and, ultimately completing her CGA degree through much preservation and self-determination. She worked at Tollestrup Construction and Canbra Foods prior to her last years as a Financial Analyst at Alberta Health Services. Sheila believed in experiencing things to their fullest. She was passionate about her interests and learned as much as she could about each one. Travelling was high on her list of activities. Each trip was researched and planned meticulously so as to enjoy everything the location had to offer. Yearly celebrations were all excuses to carry on traditions, give thoughtful gifts and celebrate with family and friends. Sheila had a love of life with a kind soul, always looking for ways to brighten someone’s day. She was one of a kind; she will be remembered and missed always by all those she touched. A Celebration of Sheila’s Life will be held at 1:00pm on Friday, October 20, 2017 at the MARTIN BROTHERS RIVERVIEW CHAPEL, 610 4 Street S., Lethbridge, Alberta. Cremation entrusted to Martin Brothers Funeral Chapels.

One Condolence for “GOING, Sheila”