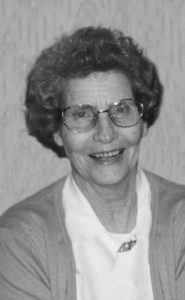 HAZEL BEATRICE MADISON passed away at Garden Vista in Magrath, AB on Friday, October 13, 2017, just 18 days before her 96th birthday.

She was predeceased by her parents; Fred and Lillian Breen, one brother, Charlie Breen, one sister, Gladys Leishman, son-in-law, Fred Stocker, and a brother-in-law Eric Pedersen.

Hazel was born November 1, 1921, and was raised on the farm in Del Bonita. Her mother passed away from a ruptured appendix when she was only 10, the oldest of their 5 children. So, between their Dad, her and few housekeepers, they raised the family on the farm. Then in 1943, her Dad passed away from pneumonia. She was now 22 and her oldest brother, Tom was 19, as a result she has always been a very hard worker. She worked for a few of the neighbors, for a family in Milk River and cooked at the oil well camp. This is where she met and married her husband and had two children, eventually returning to the family farm to raise them and help her brother.

She took great pride in her immaculate house, her huge garden, and her amazing homemade bread. She did needlework and became a very good seamstress, having to make most of the clothes. She loved to play softball and as a child, I remember it was the highlight of the day. She loved to play cards and many a night was spent playing with the neighbors.

In 2005 she and her brother sold the farm and moved to Magrath. Her last few years were spent in the Garden Vista where she still played crib and bingo, and when we visited she still got great joy out of beating us. She was so proud of her grandchildren and her great-grandchildren as you could tell by the amount of pictures that decorated her shelves at her home.

A Celebration of Life will be held at CORNERSTONE FUNERAL HOME, 2800 – Mayor Magrath Drive South, Lethbridge, AB on Friday October 20, 2017 at 11:00 A.M., with Reverend Sarah Wallace officiating. Visitation will be held prior to the service. A time of fellowship & refreshments will follow. Interment will be held at Archmount Memorial Gardens, Lethbridge, AB. In memory of Hazel, donations may be made to the Multiple Sclerosis Society of Canada, 724 – 13th Street North, Lethbridge, AB, T1H 2T1, or Breast Cancer Research and Education Fund, 366 St. Paul Street, St. Catharines, ON L2R 3N2.