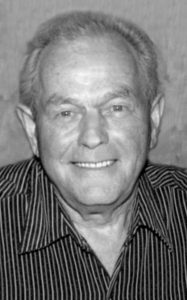 BERNARDUS “BEN” JOHANNES ANTONIUS VREDEGOOR, of Lethbridge, passed away peacefully at the Chinook Regional Hospital on Monday, October 23, 2017 at the age of 83 years.

Ben was born on September 17, 1934 in Drempt, Holland, son of Antonius and Gerada. He immigrated to Canada with his family on April 4, 1953. He worked as a farm hand in Cantur, SK, for two years, as well as for the CP Rail in Saskatchewan and Toronto for three years until April, 1956.

Ben’s occupation was a ticketed tradesman in stucco and plastering. He worked in Calgary, from 1957 until he moved to Lethbridge in 1974. In 1975, he formed a partnership, until 1980 when he started his own company, V & R Stucco Ltd. that he worked until his retirement in December 1999.

A Prayer Service will be held to celebrate Ben’s life at CORNERSTONE FUNERAL HOME, 2800 Mayor Magrath Drive South, Lethbridge, AB, on Friday, October 27, 2017 at 1:30 P.M. with Deacon Frank Peta officiating. Ben will be laid to rest at Mountain View Cemetery. Following the Interment, relatives and friends are invited to further share this day at Cornerstone Funeral Home.