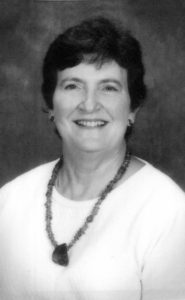 Kia approached her 23 year battle cancer with the same strength and dignity that was the hallmark of her life.

She received her Bachelor’s degree of Nursing from the University of Alberta.

Kia received the Heritage Service Award in 1995 and an award for Long Service on April 2003. She was the chairperson for the South District of Alberta Association for Registered Nurses for several years in the 1990’s. Kia was a volunteer for grief and cancer counselling and was a member of the Alzheimer’s Society and the Cardston District Foundation. She was the longest presiding president of the Cardston Legion Branch #170, a member in the Red Hat Society and the Lutheran Women’s League. She was actively involved in the St. Theresa’s church as well. Kia loved to knit and enjoyed travelling with her husband Sean.

Prayers are at St. Theresa’s on Friday November 3rd at 7 p.m. and Funeral Service will be held on Saturday November 4th at 11:00 a.m.

To celebrate her life there will be a reception following the funeral on Saturday at the Legion Hall, Cardston.

Donations can be made to the Canadian Cancer Society or the Heart and Stroke Foundation. The family would like to extend special thanks.