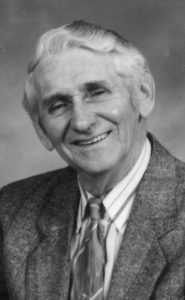 ALBERT JOHN OOMS, of Lethbridge, beloved husband of the late Ria Ooms, passed away peacefully at the Coaldale Health Centre on Tuesday, October 31, 2017 at the age of 86 years.

Albert is survived by his children, John (Bernice) Ooms of Edmonton, Richard (Deb) Ooms of Lethbridge and Joanne (Peter) Walls of Lacombe as well as 12 grandchildren and 12 great- grandchildren.

Albert was predeceased by his father, mother, four brothers and one sister.

Albert was born on August 15, 1931 in Enter, Holland. He emigrated to Canada in June of 1953. He married his beloved wife, Hendrika “Ria” on March 6, 1954 and moved to Lethbridge in 1963 where he raised his family. In that time, he also worked for Getkate Construction, and he resided in Lethbridge until his passing.

A Funeral Service will be held at the TRINITY REFORMED CHURCH, 1100 – 40 Avenue North, Lethbridge, on Tuesday, November 7, 2017 at 1:00 P.M. with Reverend Thomas Albaugh officiating.

Prior to the Funeral Service, a Private Family Interment will be held at in Mountain View Cemetery.