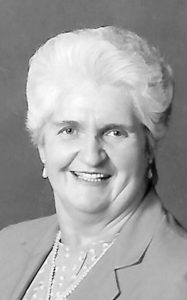 Patricia “Pat” Katherine Brosz-Cook (nee Hendel), beloved wife of the late Harold Cook, passed away peacefully on November 2nd, 2017 at the Father Lacombe Care Centre in Calgary. Pat leaves to cherish her memory her children: Kathryne (Bryant) Laboret, Patricia (Gordon) Worobec, Betty (Charles) Sanden, Margaret (Harvey) Robertson, David Brosz (Karen), Theresa (Marvin) Ruggles, Doug Brosz (Bianca), and Susan Brosz; twenty-six grandchildren; and thirty-five great-grandchildren. She was predeceased by her first husband, Elroy Lynn Brosz in 1999; her second husband, Harold Cook in 2017; and two sons, John “Jack” Elroy Brosz in 1980 and Victor Charles Brosz in 1988. Pat was born on May 30th, 1925, the daughter of Casper John Hendel and Elizabeth Bernadette (Homan) Hendel. After going to school in Rosalind and Edmonton, she joined the RCAF, Women’s Division, and served at Vulcan, Calgary, Aliford Bay and Vancouver over a period of three years. Pat attended the U of A where she received her first year of her B. Ed. She met Elroy Brosz while at the U of A and shortly after, they were married and moved to Herronton before then moving to Bow Island and completing their family. Pat managed a local grocery store for many years and then received her Bachelor of Education in 1977. She taught school for eighteen years. Pat had two great passions. Firstly, she loved her family fiercely and always wanted the very best for them. She watched the growth of her family with great interest and pride. Secondly, she loved playing sports. At the age of 42, she won the Female Athlete of the Year at Medicine Hat College. She belonged to the Softball Association and played until 1986. She also enjoyed basketball and golf. Pat was a Girl Guide Leader for many years, belonged to the Golden Age Society and the Ladies Auxiliary to the Bow Island Hospital. Those wishing to pay their respects may do so at ST. MICHAEL’S ROMAN CATHOLIC CHURCH, 1101 – 1st Street East, Bow Island, on Friday from 6:00 to 6:55 p.m. Vigil Rites (Prayers) will be held at St. Michael’s Roman Catholic Church on Friday, November 10th, 2017 at 7:00 p.m. The Funeral Mass will be celebrated on Saturday, November 11th, 2017 at 1:00 p.m. with Father Marino Infante, Celebrant. A Private Interment will take place at Bow Island Cemetery. Memorial gifts in Pat’s memory may be made to the SPCA, 55 Southwest Drive SW, Medicine Hat, Alberta, T1A 8E8, or to the Bow Island Auxiliary Hospital, 938 Centre Street, Bow Island, Alberta, T0K 0G0. Condolences may be sent through www.saamis.com or to condolences@saamis.com subject heading Pat Brosz-Cook.

Funeral arrangements are entrusted to SAAMIS MEMORIAL FUNERAL CHAPEL AND CREMATORIUM, “The Chapel in the Park”, Medicine Hat, Alberta. Should you wish any additional information, please telephone 1-800-317-2647.

One Condolence for “BROSZ-COOK, Patricia”