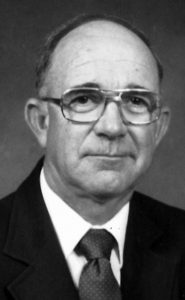 Keith Clark, beloved husband of Phyllis Clark, passed away peacefully with his family at his side on November 29, 2017. Keith was 93 years old. Keith was a proud and hard-working man, farming in the Carmangay area for most of his life. Keith enjoyed a full life; he was an active member of the community, was involved in clubs and town activities and was always ready to entertain others with his fiddle playing at dances and other events. Keith played his fiddle for others until his final days. Besides his loving wife of 72 years, Phyllis, Keith will be sadly missed by his children Laree Findlay (Howard), Robert Clark (Brenda), Danny Clark (Bonnie), six granddaughters, and ten great grandchildren. Keith is predeceased by his parents Robert Clark and Elsie Budd (Brown), his brother, Ken Clark and his sister, Doreen Liptak. A Memorial Service will be held at 1:00pm on Thursday, December 7, 2017 at MARTIN BROTHERS RIVERVIEW CHAPEL, 610 – 4th Street South, Lethbridge, Alberta. Flowers are gratefully declined. For those who wish, memorial donations can be made to Dying With Dignity, 55 Eglinton Ave. East, Suite 802, Toronto, ON, M4P 1G8 (www.dyingwith dignity.ca/lethbridge) or a charity of your choice. A Private Family Graveside will take place at a later date. Cremation entrusted to Martin Brothers Funeral Chapels.