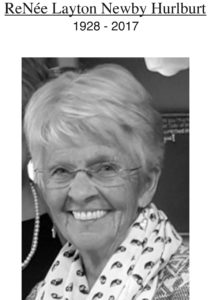 ReNée Newby was born in Cardston, Alberta in 1928, to Cora and John (Jack) William Newby. ReNée was the sixth of eight children and spent her early years on a farm in Glenwood. The family struggled through the depression like most farm families, so when ReNée was 6, her parents embraced a new plan and her father enrolled in Reppert’s School of Auctioneering in Decatur, Illinois.

Upon his return, the family left the farm and moved to Lethbridge, where Mr. Newby established his new business at the Lethbridge Stockyards and ReNée completed her schooling. ReNée was extremely talented musically, and after graduating from the LCI, she attended the Faculty of Music at Brigham Young University in Provo, Utah. While ReNée was away at BYU, her father and brother Ted, also an auctioneer, were getting to know a new young cattleman working at the Stockyards. His name was Ken Hurlburt.

On a cold January day in 1949, Jack Newby was killed instantly when his car was hit by a train at a Lethbridge railway crossing and though ReNée was excelling in her studies, there was now not enough money to support her schooling, so she returned home and went to work. In May of that year, Ted arranged a blind date with his sister ReNée and his friend Ken, and on September 5 that same year, Ken and ReNée were married. It was a good match. ReNée, with her steadfast and quiet strength, was the perfect partner for Ken’s larger than life exuberant character. They adored one another.

Foot and mouth disease hit the cattle industry in 1952, so Ken and ReNée bundled up their two babies, borrowed $500 and headed to Billings Montana where Ken enrolled in auction school, after which they returned to Lethbridge, established a new business, and set about raising a family which grew to include six children: Jody (Ted Thaell), Brant (Patty), Darcee (Bruce Robertson), Kim (Kim Tillsley), Thane (Joy) and Heath (Dallas).

It is a rare gift to be in the presence of a person who embraced life with such elegance and grace, such devotion to family and such an open heart as ReNée Hurlburt. She was never judgemental. She was charismatic. People were naturally drawn to her because she really knew how to listen, not because she worked at it, but because she was sincerely interested in what was being said. Her responses were always genuine, considerate and thoughtful.

She had a wonderful sense of humour, an easy smile and never took herself too seriously. She had a mischievous side, she loved to tease, and was a great foil when the joke was on her. She had a lovely way of finding little everyday things funny…an attribute that came in very handy as she stayed connected with 20 grandchildren and 30 great grandchildren. She enthusiastically embraced new technology – texts, emails and Facebook were efficient ways for her to stay in constant touch with her family of 77. And she did.

ReNée was never without her satchel of needlework projects, and she always had more than one in the works. Every one of her 20 grandchildren has received an Aran knit throw, and 30 great grandchildren have received an intricately embroidered or needlepointed personalized Christmas stocking. She could correct a knitting mistake ten rows back and she was currently mentoring a number of protégés whose current projects will suffer without her.

She followed the sport of figure skating with great interest, and when her daughter was involved with the sport, ReNée undertook training and was an early level figure skating judge.

Many decades ago, and before they could really afford to, Ken and ReNée cobbled together enough money to purchase a cottage in Waterton Park. It was one place of the heart for both of them and they were unfailingly grateful for every moment they spent there. The other place was the family ranch just out side of Fort Macleod. Every spring, Ken would bring the cows and new calves close to the house so that ReNée could watch over them. She had an inquisitive mind and learned quickly, so she developed a good eye for cattle, and if you sat with her at a sale she wouldn’t hesitate to astutely assess a pen of calves.

Death is nothing at all.

I have only slipped away into the next room.

Whatever we were to each other, that we are still.

Call me by the old familiar name.

Speak of me in the easy way you always used.

Play, smile, think of me, pray for me.

Let my name be ever the household word that it always was.

The Hurlburt Family would like to express their sincere appreciation to Eras vanZyl, Trinity United Church of Fort Macleod, for his unwavering support of ReNée and her family, and to Dr. Morley Wong and Dr. Ben Storey, the dialysis staff and the staff of unit 4A, Chinook Regional Hospital in Lethbridge for their kindness and consideration.

Those closest to ReNée will not be surprised to learn that it was her sincere wish not to have a service. Her inimitable style was to softly and quietly guide and encourage, always in the background. Her wishes will be honoured.

Memorials in ReNée’s name shall be gratefully accepted by:

Condolences may be forwarded to: www.mbfunerals.com