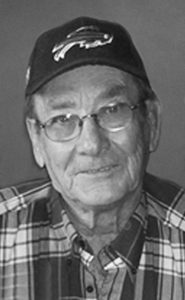 It is with great sadness that we announce the passing of our beloved husband, father, grandfather and great-grandfather, GEORGE MATHEW GROSS, who passed with family at his side, on Monday, December 18, 2017 at the age of 84 years.

He is predeceased by his parents Elizabeth and Joseph; brothers Philip and Lawrence and sister Barbara (Shockey).

George was born February 8, 1933 and grew up in Grassy Lake, Alberta. He was an avid sportsman, who loved golfing, baseball and hockey. George met and married Jean Summerbell in Taber in 1956 and then moved to Lethbridge in 1961, where they raised their four children. He worked for the Provincial Government for 25 years and following his retirement, he worked at the Lethbridge Country Club, where he was highly valued and well liked. George’s true passion though was the time he spent with his grandchildren. He would spend hours playing baseball or teaching golf to the kids that he affectionately referred to as “dip sticks”.

George was a member of the Independent Order of Odd Fellows and was on the Board of Directors at the Lethbridge Miner’s Library.

In lieu of flowers, donations may be made in George’s name to a charity of one’s choice.

One Condolence for “GROSS, George”