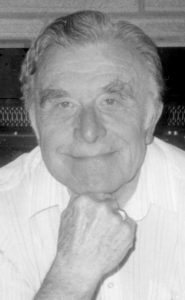 It is with a deep and profound sense of loss and sadness that we announce Wilbert “Wib” Haufe peacefully passed away at Calgary at the age of 95. A devoted husband and father Wib is lovingly remembered by his wife of 65 years Helen (nee Schaus), his four children and their spouses Tim Haufe (Lori), Christine Stewart (Darrel), Robin King (Brian) and Mark Haufe (Kari), his nine grandchildren Kim, Mark, Cam, Craig, Blaire, Mandy, Kinnon, Sam and Sarah and three great grandchildren Emilie, Matheo and Farrah and many relatives and friends. Wib mourned the premature loss of his brother Hugo and granddaughter Erin. Born and raised on the family farm near Commanda in northern Ontario Wib developed a mature and strong sense of responsibility and purpose at a very early age. He put himself through high school, taught in a one room schoolhouse and enlisted and served his country with courage and valour in World War II. Following the war he obtained a Bachelor of Science (University of Toronto), Masters of Science (University of Western Ontario) and eventually a doctorate (University of London, England). He met and married Helen and moved to Lethbridge in 1953 where he enjoyed a 33-year career as a distinguished and respected research scientist in the field of entomology at the Lethbridge Agriculture and Development Center for Agriculture and Agri-Food Canada. During this time he was president of the International Society of Biometeorology for nine years. Wib was a devout worshiper and respected elder at Immanuel Lutheran Church and a strong supporter of the community as a 60-year member of the Kiwanis Club with a special interest in the Kiwanis Music Festival. During his well-earned retirement Wib traveled widely and often with Helen, curled, golfed played bridge and gardened. Wib will always be remembered for his love of family. A memorial service and reception celebrating Wib’s life will be held at the Cornerstone Funeral Home in Lethbridge, at a later date to be announced. In lieu of flowers please consider donating to PLAN International Canada, 245 Eglinton Ave East Suite 300, Toronto, ON, M4P 0B3. www.plancanada.ca To send condolences and view Wib’s Tribute Page please visit www.lylereeves.com . Caring for the family is Lyle Reeves Funerals of High River (Craig Snodgrass) 403.652.4242.