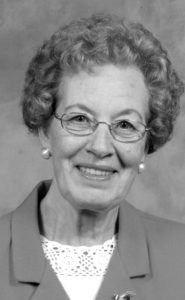 Mrs. Margaret Witzke of Lethbridge, beloved wife of Wilhelm Witzke, passed away peacefully after a brief illness on Monday, December 18th at the age of 85 years. Margaret was born on September 21st, 1932, in Duren Germany, to Gertrud and Franz Krawinkel. She was the third of six children: Paul (deceased), Christel (deceased), Betty, Hildegard, and Franz (deceased). At 22, she followed her heart, and with her family’s blessing, moved to Canada to marry Wilhelm Witzke on April 24th, 1953. They enjoyed 64 wonderful years together. Although initially overwhelmed by the transition from Germany to Canada, Margaret was courageous; she learned a new language and formed many new friendships in Lethbridge. Margaret’s greatest joy was her family. She was an amazing baker and cook. She took great pride in hosting many family gatherings, especially welcoming her children and grandchildren home at Christmas. Margaret is survived by her husband Wilhelm, her son Dieter (Margita) Witzke, daughters, Ev (Roy) Husch, and Karin (Bradford) Brown. She will be dearly missed by her grandchildren, Andrew and Aaron Witzke, Brett and Karlee Husch, and Christopher and Sydney Sikking. A celebration of Margaret’s life will be held at 11:00 AM on Thursday, December 21st at IMMANUEL LUTHERAN CHURCH, 20 Rocky Mountain Boulevard West, with Pastor Rob Mohns and Pastor Richard Brown officiating. In lieu of flowers, the family is requesting donations be made in Margaret’s name to the Immanuel Lutheran Church Memorial Fund.

One Condolence for “WITZKE, Margaret”