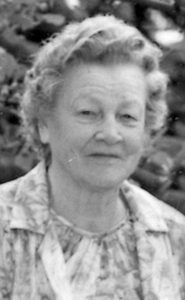 Mrs. Mabel Row of Barons, beloved wife of the late Mr. Victor Row, passed away at the Claresholm General Hospital on Monday, December 18, 2017 at the age of 97 years. Mabel was born on July 31, 1920, the youngest surviving child of Enevald and Gerhardine Herresvele. She was born and raised on the family farm in the Bowville area near Barons. Schooling was done in a one room school house. After finishing grade 11, Mabel worked for several families as a hired girl. She married Victor Row in 1942 and lived in Calgary and Montreal. After WWII was over, Victor and Mabel returned to farming, building a farmstead on the property that Mabel lived on until her death. Their first son, Gerald, was born in Calgary and grew with the addition of Vivian, Allan and Beverly after they returned to the Barons area. Over the years, Mabel kept very busy with her parenting, gardening, preserving food, cooking, raising chickens and generally being a very active and supportive partner on the farm. Mabel enjoyed sewing, knitting, weaving, reading and watching the occasional soap opera. After Victor died in 1980, Mabel learned how to paint and continued to enjoy that hobby for the rest of her life. She was known for her cinnamon buns and always had the cookie jars full for the visits from her children, grandchildren and great-grandchildren. Mabel compiled an extensive family history that is a legacy that will keep the family history available for her decedents. She was an independent woman and enjoyed good health until the end of her life. Mabel is survived by her four children, Gerald Row of Barons and Elkford, Vivian (Bob) Christopher of Yorkton, SK., Allan (Deborah) Row of Barons, and Beverly (Tom) Randall of Calgary; grandchildren, Michael (Janet) Row, Dennis (Michelle) Row, Kevin (JoAnn) Christopher, Sean (Catherine) Christopher, Gary (Glen-Mary) Christopher, Victor Row, Trevor Randall, Benjamin Randall, and Tad Randall; brother, Gus Herresvele; great-grandchildren, Grant, Kyle, Austin, Jordan, Evan R., Ashley, Ian, Liam, Lachlan, Rachel, Laura, Mark, Evan C., Phillipa, Ewan, Katrina; as well as numerous nieces, nephews and their families. Besides her loving husband, Mabel was predeceased by her parents Enevald and Gerhardine Herresvele; sisters, Emma Johnson, Bertina Johnson, Sigri Swaren, Ella Barber; brother, Erling Herresvele; and grandson, Steven Row. Family and Friends are welcome to pay their respects between 7:00pm-8:00pm on Friday, December 22, 2017 at MARTIN BROTHERS RIVERVIEW CHAPEL, 610 – 4 Street South, Lethbridge, Alberta. A Graveside Service will be held at 10:00am on Saturday, December 23, 2017 at the Mountain View Cemetery. A Funeral Service will be held at 2:00pm on Saturday, December 23, 2017 at PEACE LUTHERAN CHURCH, 4619 – 56 Ave., Claresholm, Alberta, with Pastor Donna Alm officiating.