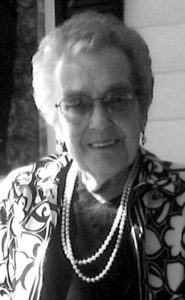 Mrs. Edna Turner went to be with her savior on Wednesday, December 20, 2017 at the age of 91 years. Edna, beloved wife of the late Bill Turner, is survived by her daughter, Susan Rodriguez; granddaughter, Amber (Joey); great-grandson, Kiron; son, Dave (April) Turner; grandchildren, Carman, Cyle (Lauren) Trekofski; great-granddaughters, Emersyn Hoyt, Danika and Kora Trekofski. Edna was predeceased by her husband, Bill; son, Michael and daughter, Heather. Edna graduated from the Nursing Program at “The Galt” in 1949, and after graduating, she nursed in Blairmore, Claresholm, the U.S.A., finishing in Lethbridge. While raising her family, Edna decided to volunteer at the Canadian Cancer Society for over 50 years. Edna had a very caring soul and will be dearly missed. A Celebration of Edna’s Life will be held at 2:00pm on Friday, December 29, 2017 at the FIRST BAPTIST CHURCH, 1614 – 5 Avenue S., Lethbridge, Alberta, with Dr. Bruce Martin officiating. In lieu of flowers, memorial donations may be made to the charity of your choice.