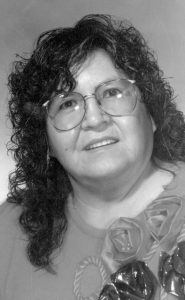 Mrs. Diane Carol Healy (Siitokksiktakaikii), beloved wife of Mr. Del Healy, passed away at Chinook Regional Hospital on Monday, December 25, 2017 at the age of 68 years. Diane is survived by her children Del Jr. (Byrde), Roseanne (deceased), Shawnee, and Chantelle; grandchildren, Nicole (Bob), Tommy (Kris), Del III (Tyrad) and Kadlyn; great-grandchildren, Diana, Tommy Jr., Bobby Jr., Chloe, Gracie and Kenzie. A Wake Service will be held from 6:00pm to 11:00pm on Tuesday, January 2, 2018 at the WHITE CALF HALL, Standoff, Alberta. A Funeral Mass will be held at 11:00am on Wednesday, January 3, 2018 at the ST. MARY’S IMMACULATE CONCEPTION CATHOLIC CHURCH, Standoff, Alberta. Interment to follow at the One Spot Cemetery.