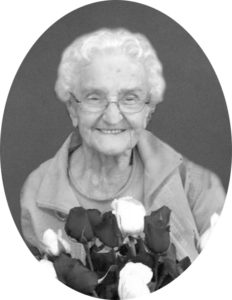 JOSEPHINE “JOSIE” KUBIK, the beloved wife of the late Emil Kubik, formerly of Picture Butte and the Blackrock Lodge in Lethbridge, passed away peacefully with family by her side at the Fort Macleod Extendicare on Thursday, December 21st, 2017 at the age of 96 years.

Josie is survived by her children: Vikki Scott, Geri Rempel (Mike deScossa), Emily (Wayne) Gryschuk and David (Lorri) Kubik; eight grandchildren, 12 great-grandchildren and one great-great-granddaughter. She is also survived by her sisters Mary Sekrijer and Angie (Henry) Schildwachter; and brothers Victor Hornak and John (Terry) Hornach, along with many nieces, nephews, and their extended families.

She was predeceased by her parents, brother Joseph, husband Emil and son Edward and daughter-in-law Joanne Kubik.

Josie was born February 28, 1921, in Rovensko, Czechoslovakia to Mary and Joseph Hornak. She immigrated to Canada along with her younger brother and sister in 1938 to join the rest of her family who had settled in the Iron Springs area. There she met her future husband Emil and they were married January 5, 1939. They shared 63 years on the farm west of Picture Butte and then their home in town prior to Emil’s passing in 2002.

Josie was an avid gardener and was especially proud of her prize-winning roses. She was the happiest when surrounded by her family and she loved to bake and cook for them. In 2007, Josie took full retirement and moved to the Blackrock Lodge in Lethbridge where she enjoyed ten wonderful years with ‘her beautiful people’. Josie was a ray of sunshine and her love of life and people touched the lives of all those who knew her. Josie was a compassionate, thoughtful and honorable woman who was full of life and laughter and very quick witted.

A Funeral Mass will be celebrated at ST. CATHERINES CATHOLIC CHURCH, 762 – Crescent Avenue North, Picture Butte, on Thursday, January 4th at 11:00 A.M., with Father Ian Gagne, Celebrant. A reception will follow. Interment will be held at Mountain View Cemetery in Lethbridge after the reception.

The family would like to express their sincere thanks to the residents and staff of Fort Macleod Extendicare for their care and kindness during Josie’s stay.

In lieu of flowers, contributions may be made to a charity of one’s choice in the memory of Josephine.