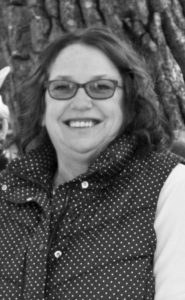 FERROL JEAN NICOL, beloved wife of Brian Nicol, of Coaldale, passed away surrounded by the comfort of her family at the St. Michael’s Health Centre – Palliative Care Unit on Monday, January 1, 2018 at the age of 58 years.

Besides her husband, she is survived by her children Stefanie (Nick Kuhl) Nicol of Taber and Brent (Brinn Lemke) Nicol of Coaldale. She is also survived by her father William Robert Sinclair, her brother Tracy (Heather) Sinclair and her sister Jolayne (Sid) Manning, as well as numerous nieces and nephews.

She was predeceased by her son Kyle Johnathan Nicol and her mother Beatrice Joan Sinclair.

Ferrol was born in Lethbridge on August 30, 1959. She graduated from LCI High School and worked for a summer at the COOP hatchery. In the fall of 1977, Ferrol enrolled in Henderson College and earned her secretarial diploma. From there, she went to work for RK Trucking for seven years where she took care of the books and provided dispatch services. In the summer 1977, Ferrol met a farmer and bull rider and she thought he was a special something else. She would follow him to the rodeos and bring supper out to the field for him with her little Datsun car. Ferrol took to the farm life easily and especially to all of the animals. In 1978, Ferrol and Brian got engaged and on January 22, 1983 they were married. Their wedding song was titled “Finally” – if you did the math on the years between. The couple resided on the farm in Kipp. On June 25, 1984, their son Kyle was born, but passed away two days later due to health issues. This was very hard on them, but they stayed strong together. On October 11, 1985, the couple’s daughter Stefanie was born and it was the happiest day of their lives. Later on, their son Brent came along and their family was complete.

The family transitioned in the Purebred Shorthorn business in 1998 and Ferrol could always be found at every show, working hard in the background. All the breeders knew her and respected her. She took up a big role as 4-H mother and assistant leader. She took great joy in helping all the members and she was often referred to as their “4-H Mom.”

Ferrol made friends everywhere she went; taking her kids to curling, soccer practice, tournaments and cattle shows. She was often more concerned with how friends and family were doing, rather than herself.

Brian was often asked how he got a wife that worked so hard on the farm. Brian would say, “It’s easy, all you have to do is give them a job they love.”

Ferrol was an amazing wife, mother and friend. She will be loved forever. The family would like to thank the staff at St. Michael’s Palliative Care and the many other medical professionals they encountered for their kindness and care.

A Celebration of Ferrol’s Life will be held at MCKILLOP UNITED CHURCH, 2329 – 15 Avenue South, Lethbridge, Alberta on Saturday, January 6, 2018 at 11:00 A.M. with Reverend Glenda Wert officiating.

In lieu of flowers and in memory of Ferrol, please bring a non-perishable food item to the service.