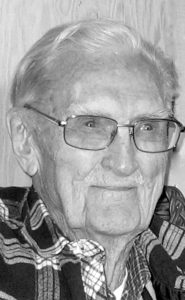 Sydney Bernard Slen was born on August 25, 1920 in Mahnomen, Minnesota, USA and he passed away peacefully in Lethbridge on Sunday, December 31, 2017 at the age 97 years.

In 1939, the love of his life, Evelyn, skated into his heart and they were married August, 1943 in Victoria, BC. Following three years of service in the army, he accepted a position at Lethbridge Research Station where he worked until his retirement in 1975. The following day he began his dream career as a “cowboy” at the McIntyre Ranch in position of General Manager. In 1987 he traded in his horse for a pair of skis but his heart never left the Ranch.

Syd was an avid outdoorsman and enjoyed hiking, fishing and golfing in Waterton for many years. As a 50 year old, he and Ev took up skiing and spent many years enjoying the sport with their family and friends. In 1993 Syd said goodbye to his darling Ev after spending a wonderful 50 years building a beautiful life and family.

Besides his loving wife Evelyn, Syd was predeceased by his sons Craig and Garth, his sister Olive, and brother Norman.

For those who wish, memorial donations in Syd’s name may be made to the Canadian Red Cross, 335 Columbia Blvd. West, Lethbridge, Alberta, T1K 5Y8 or to a charity of your choice.

Leave a Condolence for Rick and Mary Kratz