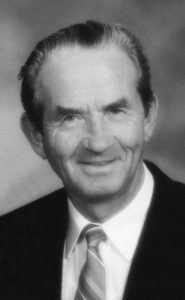 GEORGE GERHART NEUFELD, beloved husband of Apollonia “Loni” Neufeld of Lethbridge, passed away peacefully on Friday January 5, 2018 at the age of 88 years.

George was born in Hierschau, Ukraine on February 18, 1929 to Aron and Anna (nee Plett) Neufeld. He was the 5th of 13 children. When his father was taken away by the Russian army for his religious convictions and community position, his mother realized the family had no alternative but to flee their homeland. Having to leave his oldest brother Aron behind as he had been separated from the family, she guided her remaining 12 children to safety. In 1949 they immigrated to Canada. George always said his life began at 20. He was a very proud Canadian.

George met a beautiful girl with a curl right in the middle of her forehead and married the love of his life, Loni, on September 28, 1957. They settled in Coaldale, where they raised their 3 children, Linda, Katy, and Peter.

When George was in his early 40`s, he started his own company “George’s Plumbing and Heating Ltd.” and was still actively involved in the business with his son until he was 80.

George was a proud and very private man. He understood the value of hard work, first to provide for his family and then to enjoy the benefits resulting from his labour. He and Loni enjoyed yearly month-long excursions to Hawaii for many years.

Due to declining health, George spent the last 2 years of his life at Adaptacare Cedar Creek Lodge where he was cared for by a wonderful staff.

Family and friends are invited to pay their respects to George prior to the Funeral Service at the COALDALE MENNONITE CHURCH, 2316 – 17 Street, Coaldale AB. from 10:00 – 11:00 A.M. The Funeral Service will be held immediately following at 11:00 A.M. with Pastor Lil Thompson officiating. George will be laid to rest at Mountain View Cemetery, Lethbridge.

In lieu of flowers, donations may be made to the Mennonite Central Committee (MCC), 2946 – 32 Street NE, Calgary Alberta T1Y 6J7.