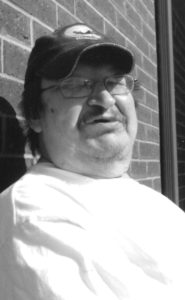 It is with much sadness that we announce the passing of ROBERT STEPHEN BOYCHUK, beloved brother and uncle, who passed away at St. Therese Villa on Tuesday, January 9, 2018 at the age of 57 years.

He was predeceased by his parents Mike and Lena, brother Tom, brothers-in-law Richard McLaren and Don Dietzen and nephew Jeffrey McLaren.

Bob was a hockey fan; he would watch any game but his favourites were the Lethbridge Hurricanes and the Edmonton Oilers. Like a true hockey fan, he could tell you the stats of any player. He also loved his family and would often reminisce about his favourite family gatherings.

A Funeral Service will be held at CORNERSTONE FUNERAL HOME, 2800 Mayor Magrath Drive South, Lethbridge, Alberta on Saturday, January 13, 2018 at 10:00 A.M. For those who wish to pay their respects to Bob, viewing will take place from 9:30 A.M. until the start of the service.

Bob will be laid to rest at a Private Graveside Service at St. Patrick’s Cemetery.