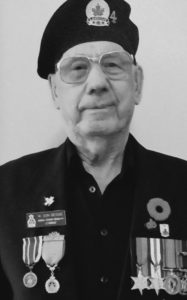 With sadness, the family of William Donald (Don) Bessie announces his passing. Don passed away at Rockyview Hospital on December 29, 2017 after just turning 97. He is predeceased by his father, mother, a brother and sister; and mourned by his sister Janet, wife Doris, children Diane (Rob) Moser, Ken, and Kathryn (Lyle Weslowski), grandchildren Tony (Eva), Phil and Tim Moser, and great-grandchildren Brooklyn and Sienna Moser.

Don was born on December 28, 1920. He grew up on the family farm near Ravenscrag, Saskatchewan with his father Fred, mother Josephine, and his siblings Charles, Viola and Janet. Don enlisted in the Canadian Army in 1941 and saw action in Europe with the VIII Recce Regiment during World War II. In later life this service to his country became very important to Don. He was a supporter of the Canadian Legion. And on two occasions, he and Doris travelled to Europe to revisit the towns and battlefields of his wartime experience.

After the war, Don settled in Eastend, Saskatchewan, to launch a grocery store with his brother. There he met and courted Doris Colville. They were married in July 1954 and over the next five years, the family grew with the births of Diane, Ken and Kathryn. While nurturing his young family, Don continued a career in grocery sales, moving from Eastend to Wilkie to Weyburn.

The family moved to Lethbridge in 1969 and Don’s work shifted to mobile home construction. Don and Doris remained in Lethbridge for four decades, making friends and witnessing the growth of their family. Over the years, their children finished schooling and moved away to start their own careers. Don and Doris moved into a seniors home in Airdrie in 2012. Though over 90, Don continued to be as active as possible. Don was healthy and hale for most of his life but in the last couple years, failing health started to be a concern.