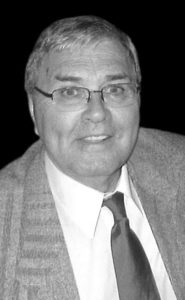 Mr. Dale Edward Loomis of Coaldale, beloved husband of Charlotte “Peggy” Loomis, passed away peacefully on Tuesday, January 9, 2018 at the age of 75 years. Dale was born November 28, 1942 in Saskatoon, SK to Jay and Margaret Loomis. He was raised in Regina, where he excelled at sports, especially football. Dale later moved to Calgary, where he met the love of his life, Peggy. They were married April 10, 1971 in Calgary, where he worked for the Alberta Liquor Control Board. With the ALCB they were fortunate to live in four quadrants of Alberta. They were blessed with two daughters, Deena and Tara-Lee. They settled in Taber, then Coaldale, and gained two sons, Stuart and Jon, when his daughters married, and eventually six grandchildren whom he treasured. Besides his loving wife Peggy, Dale is survived by his two daughters, Deena (Stuart) MacWilliam and Tara (Jon) Greenwood; grandchildren Lochlan, Torin, Rhyker, and Finley MacWilliam, Owen and Oliver Greenwood; two sisters, Sheila (Art) Kitzmann and Linda Houle.He was predeceased by his parents, Jay and Margaret Loomis and his in-laws Rodger and Norma O’Brien. A Memorial Service will be held at 11:00am on Tuesday, January 16, 2018 at MARTIN BROTHERS RIVERVIEW CHAPEL, 610 – 4 Street South, Lethbridge, Alberta. Inurnment will follow in the Coaldale Cemetery.