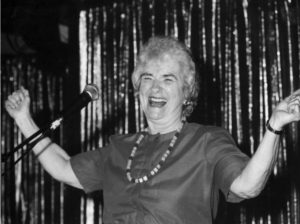 She was born April 7, 1920 in Niagara Falls, Ontario, the second child and only daughter of Peter and Jessie Cuthbert. Her father and mother, a Glasgow Scot and a Lancashire teacher, had met and married in Toronto 4 years earlier. She would be named after her maternal and paternal grandmothers—Jessie Margaret Cuthbert. Her brother Peter was two years her senior.

Between that day and the moment she quietly slipped away in the early hours of January 9, 2018, there lay a life of enormous passion and enviable accomplishment. And adventure. Ever the adventure. Of course 97 years would also claim its weight in tears. Her brother and hero was lost to leukemia when she was 22. It was a family crisis that her mother never completely overcame. Instead of being lost in an abyss of grief, Jessie turned it into a life-long fascination with existential thought. She cared for and shepherded her family through the passing of both of her own parents some 10 years apart. An ever protective mother, the loss of her third son Scott to lymphoma in 2008 followed by the death of her son-in-law Kevin the same year both tore her deeply. Then, just two months past their 65th wedding anniversary she lost her husband Jay. Throughout, she was quick to offer comfort to the rest of us in pain and a poor solicitor for her own.

Somehow she managed to upend each tragedy into a new adventure fueled by the fury of spreading either consequence or unending joy. The year that Jay died she lost a leg to circulatory disease. When she was told that she was likely too old for prosthesis she let the affected parties know that hell could feel like a rest stop compared to where they were headed. She taught herself to walk on that artificial limb, mostly out of spite. When the other leg was given up to the same disease several years later she busied herself, not with grief, with comfort for the rest of us.

Shining light into the dark corners of life became a constant theme. During the war she was a volunteer driver for the Red Cross in Niagara Falls. It was in that capacity that the little brunette with a dimple-wreathed smile encountered her soon-to-be husband Jay. He was convalescing after being shot down during the D-day offensive in France. She was the girl someone called J as they joked about her birthday. He said he knew when it was because his was the same day. Big J and Little J married that December 23 in 1944. Three boys and four girls resulted from that birthday joke. And a life-long city girl with a flashing smile and a chilling British glare packed up and moved to a ranch on a dirt trail just outside Milk River, Alberta. She left a world of wineries, lakeside cottages and almost endless summer parties to learn about coal stoves, water pails, outdoor toilets, making preserves, large gardens, and prairie oysters. She set the prairie oysters free much to the dismay of the old-timers on the branding crew. She just didn’t understand her place they must have mused in a soft whisper. They understood that even a glancing blow from those angry dark eyes could make an old cowboy wish for the returning warmth of winter.

As her kids grew she mothered the inevitable ups and downs of loves and loves lost, despair and disappointments with flashing dark eyes and quick comfort. Mothering was such a soul-driven instinct for her that her email password was ‘gopee’. Jessie led the Canadian Girls in Training and was a lay minister for the United Church of Canada for many years. These experiences continued to feed her curiosity about philosophy and meaning. Curiosity turned to a renewed yearning to follow her mother into teaching. Unable to afford a university education after high school, that dream had been shelved and Jessie became a teller with Bank of Montreal.

With a grown family and nearly fifty years on her dance card, she arrived at the University of Lethbridge—a speed reading, paper writing cyclone. She went on to earn an Honours B.A with a major in philosophy and Bachelor of Education. After graduation she helped found the Lethbridge CMHA, serving as its first Executive Director and worked with AADAC. She became an integral part of the committee that led the campaign to locate the University Campus in west Lethbridge and was a founding member of the University of Lethbridge Senate in 1968. In 1978 she was named YWCA Woman of Distinction. During her studies she was elected the first female Student Union President and was instrumental in establishing an on-site daycare at the campus. She also served on the University Board of Governors. In 2010 the University recognized her contributions by naming her one of its Distinguished Alumni.

Still thirsty for a challenge, when she was 60 Jessie returned to the University of Lethbridge to earn her Diploma of Education and finally become a certified teacher. Her permanent certificate arrived just before her 65th birthday, a fact that led to a career as special education needs consultant for the Lethbridge Catholic School District. It also set her on a collision course with the issue of mandatory retirement. Family and friends often quipped that her retirement announcement would be on the Herald’s obituary page. Retirement did come, however, twenty two years later in 2007. But the teaching spark never flickered. To her last breath she remained a fierce advocate for children and adults with learning disabilities.

Never one to say hello without a smile or goodbye without a tear, she opened her home to an eclectic array of human strays both common and uncommon. Some came for advice, some for comfort, some because they needed a bite to eat and others for the sheer pleasure of her company. For Jessie charity was never an act of giving away something that she didn’t want. Charity, she believed, takes you out of your way—it is an inconvenience. By example, she exercised this idea with considerable passion.

Jessie’s wish was to be cremated so that her remains together with Jay’s can be brought home to her beloved ranch. With six children and more than three dozen grandchildren and great grandchildren living across North America, the family is planning to celebrate this remarkable life in her favourite summer setting.

True to Jessie’s life and memory, we want to include all the hearts she has touched—extended family, friends and the guy on the corner she helped. The family will be making an announcement about a celebration of her life as plans are finalized. In lieu of sorrow, any random act of kindness would honour her memory.