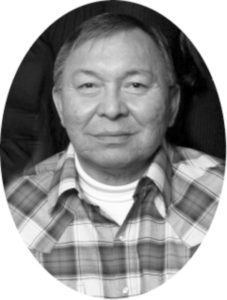 MATTHEW WELLS, beloved son of Harriet Wells and the late John (Jiggs) Creighton, passed away peacefully at the Cardston Auxiliary Hospital on Sunday January 7, 2018 at the age of 65 years. He was surrounded by his loving family and relatives.

Matthew was born at the Blood Indian Hospital on November 9, 1952. He received his secondary education at St. Mary’s School and later pursued his post secondary education at Medicine Hat, Mount Royal College and in Grouard for Heavy Equipment Operator, upon completion he gained employment with Blood Tribe Public Works as a grader operator for several years. Matthew later enrolled in the Police Training Academy in Edmonton after graduation, Constable Wells served with the Blood Tribe Police Force and later decided to work for Blood Tribe Emergency Services as an Emergency Responder. His last employer was Blood Tribe Family Community Support Services as an Elder’s Support Worker. Matthew was employed until his diabetes forced him into early retirement.

Matthew grew up taking care of livestock, especially horses which he was very fond of and owned, this led him to participated in the rodeo circuit as a bareback rider and supported his relatives who were also involved in the rodeo circuit by attending rodeos. Matthew also, played basketball with the St. Mary’s Warriors basketball team which led them to be the Alberta provincial “C” champions and the Bullhorn Bulls; he coached his own ladies’ basketball team called the “Pandas” who were the provincial champions and traveled to Cheney Washington. He was also, a manager and trainer for the Golden Chiefs Jr. “B” and Kainai Braves Sr. “A” hockey teams whom he was so proud of, he also participated in curling and golf. Matthew was also a Kainai cadet and was actively involved in the cursillo movement.

Matthew will be surely missed for his humour and charismatic ways, he was also, very kind, caring, compassionate and considerate of all that knew him, he always had a smile on his face and in good spirits, he never complained, regardless of the pain and suffering he endured. He loved his children and grandchildren and supported them in their extracurricular activities. Matthew lived life to the fullest, it was never a dull moment when you met up with him, he always had a joke or a great story to share and welcomed everyone into his home. Matthew will be dearly missed by his loved ones and those that knew him.