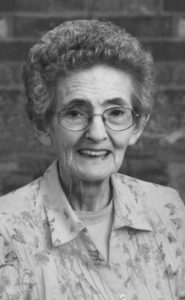 Besides her loving husband of 56 years, she is survived by her son Lorne (Tammy) Zmeko, her brother Sandy (Dawne) Johnston of Kelowna, and 2 grandchildren, Kaden and Natasha Zmeko of Lethbridge.

Bette was born in Calgary and attended school in Lethbridge, graduating from LCI. After finishing school she worked as a Lab Technician at St. Michael’s Hospital, and later as a Dental Assistant.

After marrying Rudy in 1961, they lived on the family farm near Shaughnessy until 1989, retiring to Picture Butte, where they lived until their final move to Lethbridge in 1994.

Bette took incredible pride in her son Lorne, daughter In-law Tammy, and her grandchildren Kaden and Natasha. Despite her numerous health issues, she always had a strong love for life, family and friends.

Bette was a very social and outgoing person, enjoying visits and telling stories with anyone and everyone she met.

One of the highlights of her life was the trip to Scotland with her niece Jennifer, where they explored the land of her ancestry. Other special trips included several visits with Rudy to California spending time with her brother in-law Bill, and annual trips to her brother Sandy’s cherry orchard in BC.

Bette will be fondly remembered and truly missed by all.

A private graveside service will be held for the immediate family.

In lieu of flowers, donations can be made to the charity of choice or the Immanuel Lutheran Church Building Fund.

One Condolence for “ZMEKO, Bette”