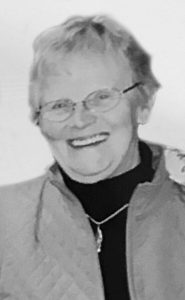 HENDRIKJE “HENNY” VAN FAASSEN peacefully left us to be with her Lord on Sunday, January 14, 2018, at the St. Michael’s Health Centre, Palliative Care Unit.

Henny will be lovingly remembered by her children: Diane (Cory) Vanderleest of Sooke, B.C., Jackie (Eldon) Konynenbelt of Nobleford, and Art Van Faassen of Nobleford. She will also be remembered by her grandson Mitchell (Kristie) Vanderleest and their children Austin and Jayden of Sooke, BC; granddaughter Roslyn Vanderleest (Justin Clark) and their children Logan, Tysen, Benjamin, and Mia of Sooke, BC; grandson Kyle (Tracy) Konynenbelt of Nobleford and granddaughter Denae Konynenbelt of Toronto. Also mourning her loss are brother Ben (Ali) Benjamins, sister Hennie (Jan) Lamberink, brother-in-law Jan (Jannie) Van Faassen, and sister-in-law Lide Van Faassen, as well as numerous nieces and nephews; they will hold her in memory in the Netherlands. Henny will also be missed by the many cherished friends she had made throughout her life.

Henny was born in Keiendorp, Overijssel, in the Netherlands, on May 21, 1935. After her formal education, she began working in a local textile factory until she had the opportunity to become a nurse. After meeting Arie Van Faassen during his brief return to the Netherlands and spending the next year writing back and forth daily, Henny moved to Canada to be with the man who she loved. In 1959 they were married in Thunder Bay, Ont. where they had their three children and spent the next sixteen years, before moving west to settle in Nobleford, Alberta. In 1988, after twenty-eight years of marriage, Henny lost her husband. She remained in Nobleford until her move to Elim Village in Lethbridge, where she truly enjoyed her stay.

Henny told many stories from a child’s perspective about growing up in a rural setting in occupied Holland during World War II. She had witnessed the generosity of parents who had opened their home to some of the cities’ starving children; she had learned the wise, innovative methods that her parents used to survive poverty; she also experienced the loss of her close sister Jo as a child. Through all of this she learned at a young age to love and trust The Lord.

Henny loved her church and being part of Coffee Break and Bible Studies, she also enjoyed being part of her community’s local book club. Henny loved music and singing hymns, tending to her plants and flowers, and enjoyed animals and nature. She always strived to find the positive in all of life’s situations.

We would like to extend our thanks to the caring staff at St. Michael’s Health Centre. We also want to thank the Home Healthcare staff for their years of kind service to Henny. Further thanks to those who have visited and helped during this time.

A Memorial Service will follow at the NOBLEFORD CHRISTIAN REFORMED CHURCH, 522 Highway Avenue, Nobleford, AB, at 12:00 P.M. with Pastor Frank Lanting officiating. Following the service, there will be a light lunch for those who would like to join.