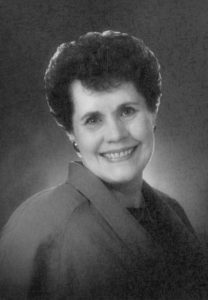 It is with deep sadness that we announce the death of our mother, MARGE ALLAN. Mom passed away with family by her side at St. Therese Villa, on Friday, January 19, 2018 at the age of 87 years, four days shy of her 88th birthday.

She was predeceased by her loving husband, Ted, in 2004 and her younger brothers Ronald Minion in 2008 and Dennis Minion in 2009. Mom always said her only real accomplishment in life was her family.

Mother was born in Magrath at her grandparents’ home (Peter and Minnie Dow). When she was three months old, she moved to Rocky Mountain House with her parents, Roy and Irene Minion. These were the depression years. Times were tough and money was scarce. But she spoke often and fondly about the years spent in “Rocky.” She always referred to them as some of the happiest times of her life. Being a farm girl and her dad’s helper was just the best.

When she was nine years old, the family returned to Magrath for a year, before settling in Raymond. Marge finished school there and spent four years working for the Bank of Montreal. It was at that time that a young Raymond boy returned home from the Air Force. As they say… the rest is history. Ted Allan and Mother were married in 1949 and raised their family there. In 1965, they made the decision to move to the big city. That was where Mom began her second career. After eighteen years, she retired from the Royal Bank on Mayor Magrath Drive. She made many fond memories of staff, customers and friends from “The Good Old Days.”

At Mother’s request, there will be no formal funeral service. A Private Family Celebration of Life will be held in the spring. Flowers are gratefully declined.