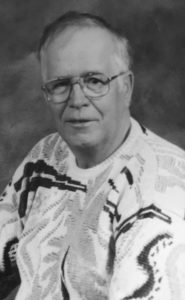 NELSON HARRY ERMAN of Lethbridge, passed away peacefully at Fairmont Extendicare on Wednesday, January 17, 2018 at the age of 80 years.

Nelson and Gertrud were married on July 1, 1961 in Taber, AB. He worked for P.F.R.A. in Vauxhall for 21 years and moved to Taber temporarily when their house was being built in Lethbridge. Nelson worked as a mechanic at Massey Ferguson, drove propane truck for Superior then settled in as a Security Guard for Palliser Distillers. Unfortunately he had to retire after 10 years due to chronic pain. Nelson and Gertrud remained in Lethbridge until health issues prevailed and he was put into care.

Nelson accomplished much in his life, including raising two children. He also had a never-ending ability to fix things. Nelson had a unique sense of humour and quick wit which was always entertaining to his family and friends.

He was a compassionate, thoughtful and an honourable man who loved his family and animal companions. Nelson’s quiet courage, strength of spirit, creativity and sense of humour was with him to the end and will be carried forward by those who knew and loved him.

He was a beloved husband, father, grandfather and friend. Nelson touched us all and our time with him was marvelous.

In memory of Nelson, donations may be made to a charity of your choice.